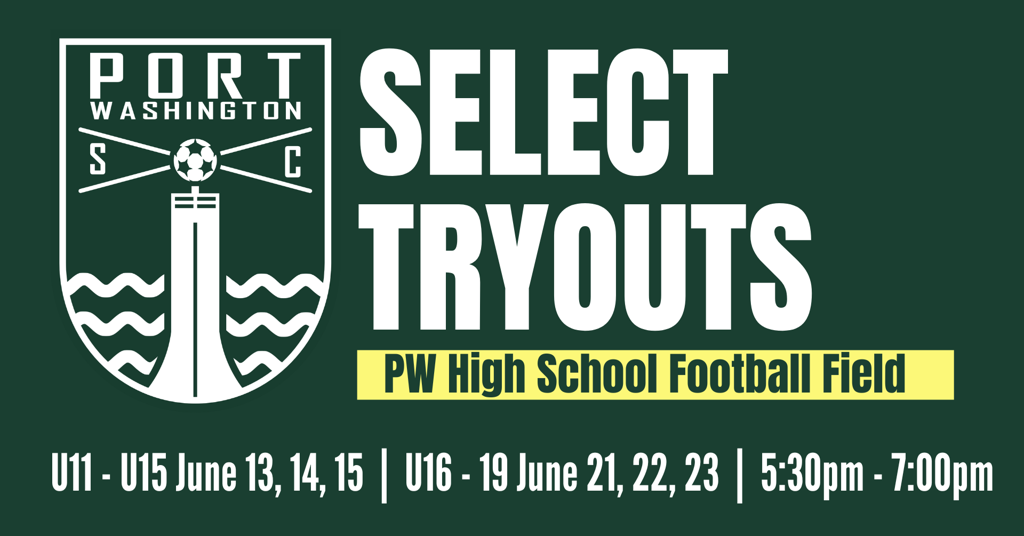 Port Washington Soccer Club’s (PWSC) select soccer is a program which allows players to advance their soccer skills and further develop their athletic abilities.  Each Select team is coached by professionally trained coaches who have obtained an “E” license or higher.  PWSC provides a positive model for the player regarding their role within the team and community.

PWSC is a member of the Wisconsin Youth Soccer Association (WYSA) whose program is part of the Southeast Classic League and Boys State League.

All U11 through U19 players are encouraged to tryout regardless of their ability.

How are Select teams formed?

Tryouts for PWSC Select are held annually in mid-June as set by WYSA.  The specific dates and times are posted on the Port Soccer website at portsoccer.org.  The tryouts take place at the PWHS FOOTBALL FIELD and last approximately 60-90 minutes.  Players must participate in a tryout or have a recommendation from a PWSC coach.  All players trying out must complete a PWSC Breakers Select Player Tryout Registration form prior to participating on the field.  The Registration form can be found on this page and the Select Tryout page.

Offer dates are set by WYSA and no club can make offers or accept registrations prior to those dates.  A written invitation to play on a PWSC Select Breakers team will be sent via email to the parent/guardian listed on the Registration form. Each player invited to play will have 24 hours to accept or decline the offer.  In the event of a decline, the next player on the list will be invited to be on the team.  After all offers have been accepted, all other players who have tried out will be notified in writing that the team has been formed.

Select soccer is not recreational soccer.  A higher level of commitment is expected by players and families.  Players are expected to attend all practices, games and play in tournaments and winter league.  If there are questions about the expectations of PWSC Select Soccer, please contact Rob Blake at robdocpwsc@gmail.com.

Dates, times and location of training sessions are determined by the PWSC Coach.  All players are expected to attend all outdoor and indoor practices.

WYSA has no rules outlining how many minutes each player should play in a given match.  The PWSC Coach will adjust playing time depending on player attendance at practice, effort and attitude.

PWSC Teams will select tournaments from a recommended list and will participate in two Fall tournaments and two Spring tournaments.  Location and participation is decided with input from the PWSC Coach and parents.  Participation requires additional player fees.

Home games are played at the Kohler Credit Union Fields in Port Washington.

PWSC is a volunteer organization.  Volunteer requirements will be discussed at the mandatory team meeting.

Uniform costs are NOT included in the Select Player Fees.  Uniforms are ordered separately through Stefan’s Soccer.  The cost is approximately $100 per player for two jerseys, one pair of shorts and socks.

Tournaments are NOT included in the Select Player Fees.  Tournament costs will vary depending on the tournament team registration fee and the number of tournaments a team participates in.  An additional $30-$45 per tournament will be required.  Advance notice will be given for these types of fees.

Winter League is NOT included in the Select Player Fees.  A winter session at InBounds or Uihlein is approximately $50-$60 per player.

Additional team apparel and accessories may be purchased on an individual basis.

If there are any questions regarding the Select information above, please contact: